The skies are still low, grey and forbidding when we rise. Our plan for today is to see the many historic buildings in the old Zadar city as well as walk around the parklands between the Five Wells area and the newer parts of Zadar.

Our walk commences at the Zadar Museum of Glass which stands on the South Eastern corner of the old fortifying wall that runs almost the full length of the harbour side of the old town.

Not everyone in Croatia is doing it tough as the harbour is full of fancy large motorboats and yachts.

A pedestrian bridge that forms a short cut across, rather than around, the harbour has a constant stream of people making their way from the new to the old Zadar.

The stroll along the wall takes us above the farmers market to our left and over the Sea Gate where we had entered Zadar.

Parking around the old city is in short supply. Ferries regularly depart from the harbour and the Sea Gate area is always busy. Cars line the side of the street that runs along the top of the wall and we have to compete with vehicles as we walk.

The wall drops down soon after the Sea Gate and our walk takes us into the Three Wells area of the old city. A small park full of busts of historically significant people lies behind the Angel topped church of Our Lady of Health. 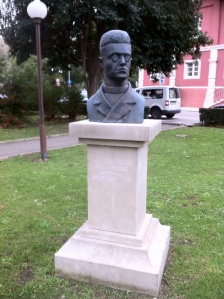 From here we head to the North Eastern corner. A ferry is belching black smoke into the sky which we do our best to avoid as we make our way to the North Western corner which is the site of the Sea Organ and Salute to the Sun.

The wind has raised a decent chop and the Sea Organ is playing a rapid louder tune today.

Old Zadar is very beautiful and having access at anytime to this musical response to the Adriatic makes it magical.

After tearing ourselves away from the Sea Organ we walk down the broad clean footpath that follows all the way to the Zadar University in the South West corner of Old Zadar.

On the left, close to the Sea Organ, behind a lower fortification wall, lies the St Francis’s Church and Franciscan Monastery.

Our route then takes us past the Forum which is an open area full of Roman ruin remnants such as one of the two Pillars of Shame (a pillar where the naughty were tied and pilloried). Fragments of columns and pagan frescos lay all about. 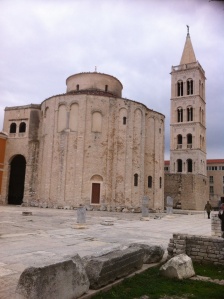 There is a lot to see in a relatively small space.

We have lunch at the nearby restaurant Groppo’s. The heat is turned way up inside and after the meal Pam is not feeling very well.

We have the luxury of time, we are not in any rush, we retire to our apartment for the afternoon and only poke our heads out to have a delicious dinner at the Bistro Kalelarga which is where we had breakfast on our entry to Zadar.

We chat with the waiter at the Bistro Kalelarga about our travels in, and love for Croatia. We tell him of our plans to visit Plitvice Lakes National Park and he seems surprised. He tells us to be careful on the walks as the paths are likely to be slippery and having heard of my swimming exploits in Pula, warns me not to try swimming in the lakes.

Spectacular blue skies greet us the next morning. Pam receives a picture from Lexi showing our dog Ivan sleeping with a ball in this mouth.

We are off to a happy start and both of us feel in fine form.

Having decided to resume our walk around Old Zadar from where we left off we walk the hundred meters back to the Forum area. I take pictures of everything I had already taken the previous day, this time with the beautiful blue sky as a backdrop. 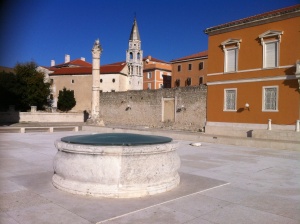 Back out at the Sea Organ we discover the low hanging clouds of the previous days have obscured the Velebit mountain range lying East of Zadar that runs parallel to the coastline.

The Velebit mountain ridges are capped in snow and form a spectacular backdrop to the skyline of the town. 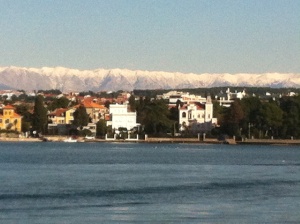 From the Sea Organ we are going to walk the full length of the Zadar Riva (waterfront promenade) down to the University and then have a look in the parklands that lie at the far end of the old town.

We pause for Pam’s morning caffeine intake at a seafront cafe before heading down the Riva in the sunshine.

The Zadar locals are out in force in the bright cool blue morning. There are many more people walking the Riva than we have seen thus far. The Forum area was full of parents watching as their children ran among the ancient ruins.

A childcare group full of little four year olds all dressed in tiny colourful jackets and beanies with bobbles and ears come out to play in the parkland that lies between the cafe and the clear blue waters of the Adriatic.

It is a stunningly beautiful day. 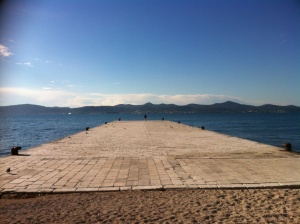 People are out strolling along the Riva, riding bikes, walking their dogs. A dog runs down the one of the regularly spaced stairs that enable access to the water to fetch a stick thrown in by it’s owner.

Near the University Pam sits next to a life sized statue, thinker and shell.

The Riva continues around past the University, beyond a little boat filled cove and ends at the Zadar Land Gate.

From the Land Gate it is a short walk to the Five Wells area where we find an entrance to the rock wall tiered parkland Perivoj kraljice Jelene Madijevke that forms the Southern boundary of Old Zadar. 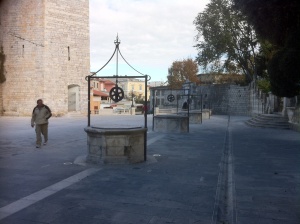 This park overlooks the old town and we climb the paths that wind around the hill of the park. Buried under this hill a subterranean nightclub offers caveman frivolity and temptation we are glad to avoid.

Of course Pam makes it to the top first. Another ‘Eye of the Tiger’ moment.

We look out across Old Zadar, the second pillar of shame is clearly visible as are the Captains Tower, St Simeon’s Church, the Velebit mountain range and the red tile rooftops of the town. 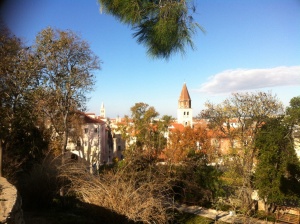 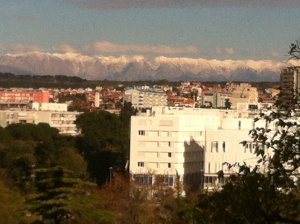 Pam is keen for the arrival of her book on the Lycian Way so that she can commence plotting some new tortures for my poor knees in earnest.

We set off yet again for the Post Office however our trip once more ends in vain.

This walk takes us beside the long stone fortification wall that forms one of the boundaries of the larger parkland Perivoj Vladimira Nazora. On our return we enter this green haven and stroll the gravel paths in the shade of tall trees. 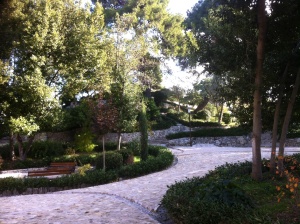 As we sit for a short while on a park bench some young schoolboys pass by. Pam ask’s them ‘why they aren’t in school’ however they wisely adhere to the ‘stranger danger’ ethos and ignore the crazy lady tourist.

Our exit from the parkland takes us by another old well located within a stone square.

We decide to have Linner in the nearby restaurant Fossa that specialises in seafood. Despite the harbour location and abundance of fishing boats seafood is expensive in Zadar (and other Croatian/European cities).

Our day ends with another spectacular sunset accompanied by the haunting evening tune of the Sea Organ.

4 thoughts on “The Siren still sings”