The constantly gathering cloud cover of the previous day solidifies during the night. We wake to the sound of waterfalls coursing the stone stairs outside our apartment once more.

The glory of our climb to the sky tides over into our last full day in Dubrovnik.

Despite our inactivity we are at peace.

Having had advice from the tourist office as well as the online bus schedule that the daily bus to Montenegro leaves at 10:00am we awaken early the next day.

We have gone through our pack and check routine and are ready to leave by eight. By nine Pam cannot stand the waiting about a moment longer and we carefully descend the wet stone stairs and make our way out the Pile Gate for the last time.

The sky is grey and it looks like it could rain at any time, we elect to catch a cab to the distant bus terminal.

We arrive by 9:15am only to be told by the ticket office that the bus does not actually leave until 11:00am.

Last year we would have used this as an excellent reason to find a bar and have a drink. Our teetotalling 2014 resolve has us mumbling and grumbling on the wet seats in the bus terminal instead.

Eventually the bus arrives and we are off. We climb the winding coastal road and pass the Dubrovnik airport.

Dubrovnik lies low in the south of Croatia and after an hour or so of winding our way through little towns and villages we come to the border crossing between Croatia and Montenegro.

There are two operators on the bus and one of them comes to collect everyones passports which are handed to the authorities outside. As the processing occurs we witness the first actual thorough border check we have encountered thus far in our travels.

A completely packed mini van with a family, Mum, Dad and two little kids in the back, has been waived into the checkpoint.

The guards get Dad out of the fully packed van and make him take every piece of luggage out of the back which they then place on a metal table, open and go through. Inside the car Mum is grinding her teeth, the kids by now have escaped the restraints of their car seats and are climbing into the front and back.

I can see steam venting from Mum’s ears as she watches her carefully packing of the Tetris like stacked luggage being disrupted in the side mirror.

Border police peruse the underneath of the vehicle with mirrors on long handles. Finally the last piece of luggage has been rifled through.

They leave Dad to repack on his own, he is having a lot of trouble fitting everything back in.

The checking of passports for the bus passengers takes a bit of time, at least we don’t have to get out and empty our backpacks. At last we move on leaving Dad still sweating as he pushes luggage back into the van.

The bus operator hands back the passports. A couple of hundred meters down the road we go through the same process again at the Montenegro side of the border.

The border crossing has taken at least quarter of an hour if not longer. At last we are back on the open road.

Montenegro is a tiny mountainous country with a population of less than seven hundred thousand people. It gained full independence as a country in 2006 after a referendum for independence from Serbia passed by a narrow margin.

It shares borders with Croatia, Bosnia and Herzegovina, Serbia, Kosovo and Albania.

Our destination for today is the coastal town of Kotor which lies at the end of a series of huge bays.

Crossing the border from Croatia to Montenegro is a little like time traveling back into the recent past. Roads are noticeably narrower and rougher, most of the cars on the road are models from at least a decade ago.

Recovery from destruction suffered during the recent conflict is significantly less advanced than in nearby Croatia, many buildings are still in a state of disrepair and are abandoned.

The border crossing between Croatia and Montenegro that we have passed through is inland and we drive for maybe half an hour further before the coastline once more comes into view.

Once the road rejoins the waterline we follow the winding edges around the huge bay.

In the direction we are driving the waterline is to our right. To our left mountain ranges climb precipitously. Across the mirror surface of the water mountains also thrust their way to the sky.

This is what I have imagined fjords in Norway must look like.

I still have not realised we are driving around the edge of a huge bay, the mountainous land across the water follows us for so long I assume it is a large island.

This idea is reinforced as we pass a ferry that is apparently transporting vehicles and passengers to the ‘island’.

The countryside is amazingly beautiful. Our heads are swiveling around trying to take it all in as we rattle along in the bus.

Despite the threatening grey skies there has been no rain at all since we left our apartment in Dubrovnik.

As we wind our way further into Montenegro water is occasionally sheeting across the road. Fresh water streams bursting into the salt of the bay are frequent.

I notice many little streams coursing down following concrete channels between buildings in the towns we pass through.

Moss and lichen grow everywhere, it is obvious this region endures significant precipitation. 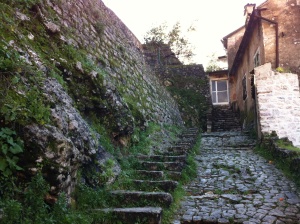 Hydrodynamic awareness would need to be at the top of the list for any construction efforts as the mountains towering above provide huge catchment areas that in effect act as enormous funnels.

As we wind further and further into the bay I can see in the distance a massive white spray jetting into the receiving waters. As the bus comes closer I try to see where this powerful blast of water is coming from.

As we cross a bridge taking us over this white flurry it appears the water comes from nowhere, it is just blasting from a hole in the mountain base.

The winding road leads through one picturesque damp little town after another.

Two small close together islands with religious buildings built on each one are framed by the reflections of the surrounding mountains.

Finally we arrive in Kotor and pull into the bus terminal. My legs are stiff and I creak down the bus stairs like an old man.

Montenegro uses the Euro as it’s currency and the few remaining Kuna we still have are useless.

Luckily we still have a couple of Euro fifty cents for emergencies.

Following our usual procedures for arriving in new towns we have no idea where our apartment is and we can no longer use the Croatian phone card we purchased in Zagreb to access google maps.

We decide to go into the bus terminal cafe to see if we can use their WiFi.

Opening the door allows smoky fumes wafting from the inside to escape. There is a huddle of older men inside nursing beers and playing cards, a couple of men are sitting at the bar, a blond woman is serving drinks.

Every single one of them is smoking. Despite the small dimensions we can barely see from one side of the room to the other.

The waitress comes over and takes our order, she tells us she speaks a little English. Pam orders a cappuccino, we get the WiFi password however we still can’t find the location of the apartment.

When the waitress returns with Pam’s cappuccino (which has an ornate swirl of chocolate sauce on the foam that Pam deems delicious) we show her the apartment address and ask if she knows where it is.

She confers with one of the men sitting at the bar who indicates he knows where it is and advises catching a cab.

When we explain that we can’t use our phone to make a phone call the lovely waitress uses her own phone to call a cab for us and refuses to take payment for the call.

Looks like the Montenegro populace are friendly and helpful as well.

It is easy to overlook small things like having trouble breathing when lovely people are so willing to help you in your hour of need.

The cab rapidly arrives, we pile our packs into the boot and head off back in the direction the bus had come. Shortly after crossing the largest of the fresh water streams heading from the nearby mountain we veer right from the main road and make our way up a climbing maze of narrow streets that wind through houses built on terraced levels of the lower mountain side.

Pam has warned me that we are only going to be paying 20 Euros per night (the least expensive so far) for the apartment in Kotor and to not expect any flash accommodation.

The apartment turns out to be quite high above the water line, only one further row of houses stands between it and the steep slopes of the mountain towering above.

We are the subject of curiosity as we alight from the cab (cab fare 2 Euro). The apartment is actually a self contained section of a two story family home.

We are greeted by the mother, a teenage daughter and a younger boy.

The mother introduces herself however the young daughter does most of the talking. The family usher us around the side of the house and into the apartment which turns out to be comfortable, clean and spacious.

We have a balcony which looks out over the mirror of the gorgeous bay below.

The young daughter speaks excellent English and blushes as I compliment her on her command of the language. She shows us through the apartment and advises us the best paths to follow to walk to shops and the Kotor Old Town. 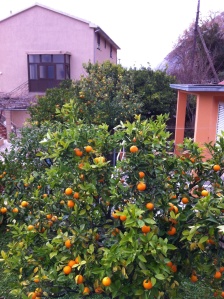 It is getting late in the day by now and we need to purchase supplies for dinner so once we have dropped off our gear we find our way down the paths our new young friend had advised taking and make our way to the obviously newly constructed small shopping center we had passed on our way to the apartment.

Incessant exploding fireworks echoing across the water and ricocheting between mountain slopes accompany our journey.

Staples such as fresh fruit, vegetables, bread are even cheaper here than in Croatia. The extremely low price of alcohol has me cursing our New Year resolve.

We make our way back up to the apartment amidst mountain cast shadows as the sun slips below the lofty horizon.

Later in the evening as we eat our simple dinner a gentle tapping at the door surprises us.

The young daughter has brought us up some delicious slices of homemade cake.

‘Don’t be afraid of the fireworks’ she tells us smiling ‘tomorrow is the Orthodox Christmas Day so tonight is Christmas Eve’.

‘The Montenegrin people are celebrating’.