Beholden to no one and nothing other than each other and the next red and white marker of the Lycian Way, we spend several days resting in Finike after our mountain adventures.

Pam does a couple of day runs into Finike for supplies while I knock out as many blog entries as I can in the comfort of the Anadolu seaside apartment.

A large clean window in the restaurant section of the Anadolu Hotel overlooks the live bouquet of the colourful flowering garden that is maintained as a ‘hobby’ by the owners father.

Not sure when we will have another prepared meal we eat a final hearty delicious breakfast in the delightful surrounds.

Our companion bees that fill the hills and mountains we have climbed with their monotone have granted us amber sweetness thick enough to stand a knife in.

‘We came to Turkey for the Lycian and stayed for the Honey’. I should write copy.

Walk kilometers struggling along the soft grey sand of the often rubbish strewn beach, walk the same distance or further along the interlocking brick paved footpath beside a busy four lane road or catch the dolmus to Kumluca and then to Mavikent? 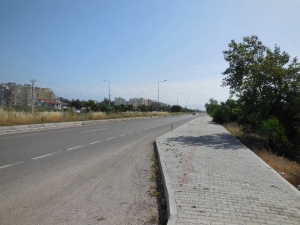 A simple choice really, within a few minutes a dolmus pulls up and we struggle into the near full little bus with our heavy packs.

Other than people actually working in the outdoors such as shepherds and farmers our observation has been that Turkish people seem to spend most of their time indoors and not make a lot of use of the glorious land they live in.

Just like anywhere else in the ‘disconnected from nature’ modern world I guess.

Within a very short distance on the bus we have both noticed that today is very different. Every little glade in the bush along the beachfront is occupied by families all having picnics.

‘I don’t even know what day it is’ I reply to Pam’s question ‘Is it the weekend’?

Turns out it is Tuesday 6th May when Pam consults her iphone however this knowledge leaves us none the wiser as to the picnic mystery.

We are the last passengers left on the bus when it pulls into the terminal on the outskirts of Kumluca and after discovering that the dolmus to Mavikent has to be hailed from the roadside we cross a busy intersection and begin striding down the road.

Almost immediately a dolmus passes and stops to let us on. Once again the bus is nearly full and we sit in separate seats. Pam sits next to a young woman who turns out to be a teacher that speaks some English and asks about the picnickers we have seen everywhere.

Apparently today is an important day for Turkey and although it is not an officially sanctioned public holiday it is traditional for families to gather and eat outdoors. Our new young friend goes on to tell Pam that a lot of children will be missing school today and that there will be a picnic at the school for the few that turn up.

Highlighting her point a young boy dismounting from the bus is laden with picnic supplies and gets his shoelaces caught in our walking poles which nearly proves his undoing.

By the time we have reached the mosque in Mavikent other than the driver and a man who appears to be assisting him Pam and I are once more the only passengers.

Our packs, clothes and complete inability to converse in Turkish must make our hiker status very obvious for the bus pulls up beside the mosque without us asking and both the driver and his assistant point up the left branch of the T-intersection we have arrived at.

Understanding nothing other than Likya Yolu we still get the message that it is time for us to commence walking for the day.

Like all the mosques we have passed there is fresh water available here so we drink deep and refill our water bottles as a matter of course before making our way up the bitumen road.

To our left a series of poly tunnels full of tomatoes and chilli plants. To our right a line of old holiday homes on thin wooden stilts face the sand and Mediterranean.

This line of houses ends where the road approaches the beach and we take the opportunity to walk out to the sand beside a long abandoned bar and restaurant.

From here our only option is the oh so familiar up, up, up.

Every available shady space on the beach front below has picnickers, children playing, kicking balls, running on the sand beside the inviting blue water. 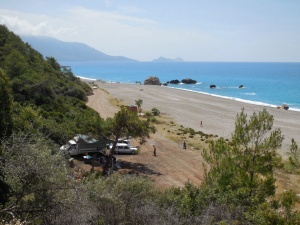 It’s the black ribbon that beckons for Pam and I.

Neither of us are fans of walking on bitumen and this road that is described in our guide book as a quiet country lane must be having more traffic on what we are now calling Yogi Bear Day than all other days of the year combined.

Turkish drivers communicate frequently with their car horns in a friendly way of greeting rather than expressing frustration and we are constantly being tooted by each vehicle of the long lines of cars that pass as we plod along under the hot blue sky.

Every possible and many improbable spaces are occupied by picnickers as we wander only the undulating road. Blue smoke laden with meat grease rising from open fires has me salivating and Pam nauseous.

Glorious views greet us around each new corner and Pam is soon far ahead of me as I struggle to match her road pace at the best of times and have no hope at all when I stop to take photos. 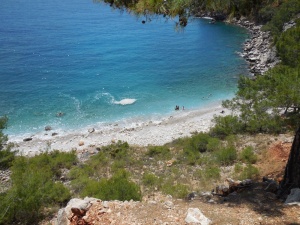 Several kilometers on, the twisting road brings us to an area where parked cars line each side of the road. Cars are soon double, then triple parked, before we come to a roadside market in a bend of the road where the blue greasy smoke is so thick it makes breathing difficult even for me.

Beyond the roadside market the road bifurcates and after a quick consultation with the guide book and map we take the right branch which leads up a long hill where a water altar and strangely vacant picnic bench offer a great rest point with spectacular views.

Down and around a few more bends the long high mountain ridge that we plan to walk around once we have passed Karaoz comes into view.

Our guide book describes Karaoz as a small village of summer villas with no pensions or accommodation for hikers however within a few meters of entry into the town we are passing roadsigns advertising one pension after another. 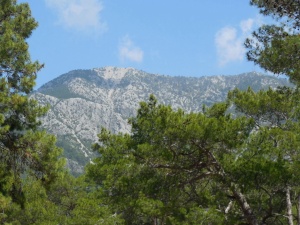 All that counts is the next marker which we follow like Hansel and Gretel chasing breadcrumbs. We are led down the road to the beach where a comfortable looking bar with plenty of outdoor seats is too inviting to pass.

Our tenuous plan of the morning was to at least make the lighthouse which lies several kilometers further along the trail between Karaoz and Adrasan and camp there for the night.

Sitting in the comfort of a chair after having eaten a mid-afternoon lunch at the bar I am loath to continue on and Pam feels similarly disinclined. She wanders off to check out the pension we have passed fifty meters back up the road and returns with the great news that we are staying in Karaoz for the night.

Oz Likya Pension turns out to be a two story house with spacious clean modern rooms on the second floor. Our room has a large comfortable queen bed and another single. Eyes from a 3D picture of smiling dogs faces that would be kitch anywhere else follow us round the room.

An hour or so later, restored to our normal good humour by the flow of a great hot shower we are just about to head back to the bar when our landlady greets us at the door of the pension bearing a tray of tea and treats.

It would be the height of rudeness to refuse such kindness, she ushers us out to the back yard where she and her husband along with two friends have been chatting at a table under the cool deep shade of a friendly tree.

Despite the language barriers we work out that our landlady and her husband are retired high school teachers and that their two friends are both Turkish however have lived in Germany for thirty five years and return to Karaoz for holidays.

We have a laughing halting conversation and show pictures of Lexi which always impress however despite our best efforts we come no closer to solving the mystery of what Yogi Bear Day is all about.

Back at the bar we discover they have WiFi and from there Google works it’s magic. 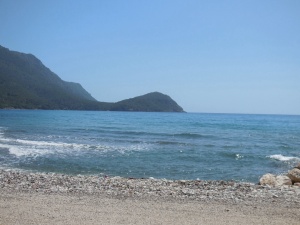 May 6th is the day of Hidirellez which is regarded as one of the most important seasonal bayrams (festival) in Turkey. Named as Day of Hızır (Ruz-ı Hızır) in Turkey, Hidirellez is celebrated as the day on which the prophets Hızır (Al-Khdir) and İlyas (Elijah) met on the earth. The words Hızır and İlyas have since fused together to form Hidirellez.

On this day ceremonial activities for Hidirellez are prevalently and elaborately prepared in villages or towns rather than metropolises. Preparations for the celebrations are associated with cleaning the house and garments to be worn and doing shopping for the coming feast. Indoor areas of houses along with outdoor places such as gardens are supposed to be clean, because Hızır is expected to visit all houses on that day.

All preparations related to the ceremonies are of particular concern to young men or women since Hidirellez is regarded as the most proper occasion for youth wanting to marry in the future to find a suitable match.

As Hizir is regarded as a healer, some ritual practices as regards to health issues can be seen on Hidirellez Day. Meals of cooked lamb meat are traditionally feasted. It is believed that on Hidirellez Day all species of the living, plants and trees revive in a new cycle of life, therefore the meat of the lambs grazing on the land which Hizir walks through is regarded as a source of health and happiness.

Having a little clearer understanding of the joyous events we have meandered through provides a lot more satisfaction than just flippantly calling it Yogi Bear Day.

‘Isn’t that right Boo Boo’? I ask Pam as the sun dips towards the horizon.

‘It sure is Yogi’ she replies smiling ‘It sure is’. 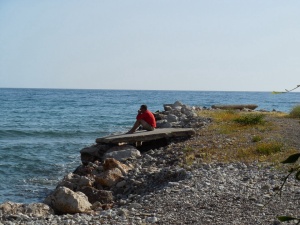