In terms of distance alone (guide book indicates thirteen kilometers) today will be a shorter walk. Pam and I no longer trust any indicators of distance (guide books or roadsigns) particularly on the entry to larger towns such as Ponferrada.

The only thing I am sure of is we have a long steep downhill section to cover first.

We wake relatively late as we do not want to be starting in the darkness. We have read the section leading out of Riego de Ambros is very steep and can be slippery in the wet. It has stopped raining during the night however there has been no chance for the ground to dry.

We have breakfast at the pension and as we go to leave the little Spanish sweetheart puts her hands over her heart like a butterfly spreading its wings as she says ‘Love Australia’. We return the favour saying ‘we love Spain and the Spanish people’

A beautiful way to start the day indeed and we are full of smiles as we walk down the driveway from the pension stopping to take a photo of the old horse drawn cart by its side.

We are out of the town in five minutes and head off down the Way which is living up to the description we have read. Near the bottom of this first stage of the descent the path becomes solid mossy slippery rock that leads to a little low tunnel under tree branches. 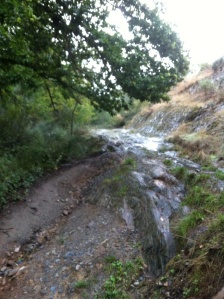 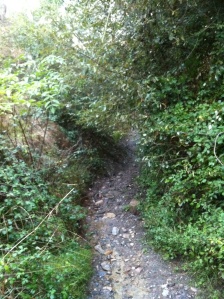 We pass through this tunnel to the gully bottom squelching through the muddy bottom and then break into a little flat clearing where the sun breaks through for the first time. 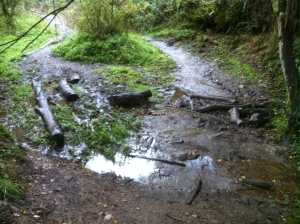 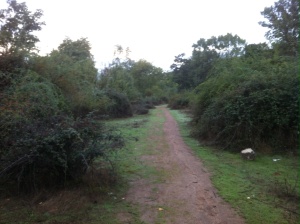 Down, down, down, we wind, down the treacherous rocky path.

Down, down, down, we pass a pair of abandoned boots with the toes cut out by the side of the path.

Down, down, down, we zigzag lower and lower until we finally join the bitumen road just prior to the entry to the large village Molinaseca which lies on each side of a stream of cold water tumbling down from the ranges we have just crossed.

We cross this stream via a stone bridge and walk through the canyon town centre in the early morning. 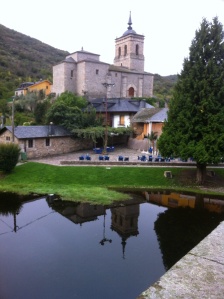 This village obviously does good trade catering to weary pilgrims later in the day for the street is lined with bars and cafes many of which are still opening. We pass a ‘supermarket’ which has fruit displayed spinning on an old record turntable. 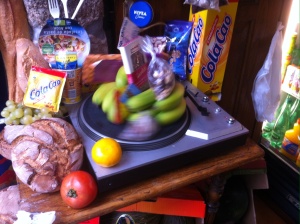 From Molinaseca the Way follows alongside the bitumen road on tiled concrete footpaths leading to Partricia. We follow a large group of Canadian pilgrims who have a dog walking beside them. They are trying to rid themselves of the dog which periodically wanders into the middle of the road bringing traffic to a halt.

The road takes a long sweeping curve up and over a gentle hill over the crest of which lies the village/suburb Partricia.

From here we can see this road heads straight into Ponferrada however the always circuitous Way diverts to the left and we leave the bitumen to follow a gravel road down into a gully and the over a hill into the village Campo.

From Campo it is about three kilometers to regain the outskirts of Ponferrada. On this relatively flat section we pass a well laid out radio controlled car race track and airfield.

We stop for rest at the first open cafe we come to in the outskirts of Ponferrada and check our bearings for the walk into town and to our hotel.

Ponferrada has two distinct sections, the old town built on the hill to the east of the Rio Sil which includes the massive stone fortress Castilo de los Templarios and the modern town built of the flatlands to the west of the river. 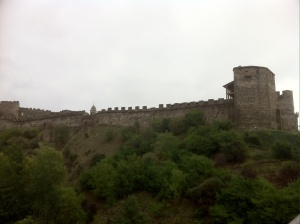 We initially follow the Way into the old town however I realise that our hotel lies in the other direction so we retrace our steps, cross the Rio Sil and make our way through town to the Hotel Temple which is our destination for today.

The Hotel Temple foyer looks like it was constructed in the Middle Ages with a floor of huge dark uneven square stone tiles separated by four inch thick hardwood beams. There is a suit of armour standing behind us as we sign in which is in keeping with the stone walls and rough hewn tree trunks supporting the ceiling. 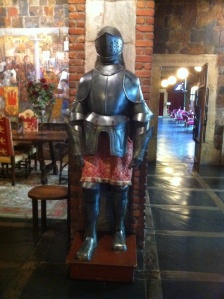 After showering we make our way downstairs again and enter the bar which has a floor of hexagonal dark stone tiles laid like a honeycomb. The weight of centuries is lifted by the inscription on the concrete of the doorway, completed in 1986.

We spend the afternoon comfortably in the bar working on the blog as the sun streamed through the tinted glass before wandering back the kilometer into the old town as the sun fell towards the west for a tour of the sights and dinner.

We eat al fresco in the town square in the fading light as the Spanish come out to play. Pam has a lovely salad and grilled vegetables that she declares the best meal she has had so far in Spain.

It is cool as we walk back to the hotel and Pam commandeers my jumper.

As we approach the hotel we hear the sound of a concert in the park across the road. Not able to understand the lyrics we wander over only to find the concert is the Spanish equivalent of the Wiggles with the stage full of dancing children with parents looking on from below.

Family activity happens late in Spain, it is probably ten o’clock at night and the kids are still going strong. Everyone would be tucked up in bed back in Brisbane at this hour of the night.

We are a bit long in the tooth for the Wiggles so we cross the road back to the hotel and tumble into bed.

Twenty three kilometers is the plan for tomorrow.