Despite the reputably blue skies that greet us the next morning I am loath to stir. Pam puts on her spurs and goes to work to rouse me.

‘Get up you lazy B’ she exclaims, ‘no rain, no excuses, no problems, we are going to the beach’.

She has been reading Rick Steves’ guide book on Croatia that has been left in the apartment by our landlord and discovered Rick Steves has a favourite beach in Dubrovnik.

Apparently our mission for today is to walk there and see what is going on.

Finally her enthusiasm wins me over and I crack open my bleary eyes, shower and breakfast in super slow mo and hey presto I am good to go.

‘So where is this beach and how long do we have to walk to get there’? I ask once my wits have returned and am handed the guide book in reply.

‘I thought it best for you to work out the plan of attack’.

St Jakov’s beach turns out to a few kilometers in an Easterly direction from the Dubrovnik Old City. It looks simple to reach from the description accompanying the map.

Down the stone stairs, left at Prijeko and onto the Stradun, Dubrovnik’s Old City is starting to feel like home.

From the Eastern end of the Stradun we turn left beside the Sponza Palace and make our way past the semi circular stairs of the Dominican Monastery we had seen from the walls above towards the Ploce Gate and exit the Old City with the harbour below us to our right. 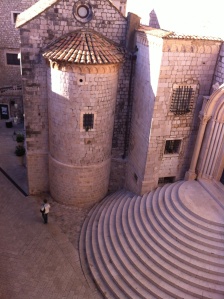 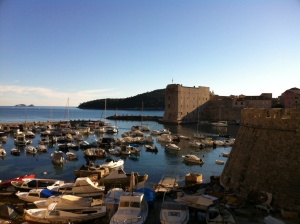 Despite having walked across the top of this arch via the Old City Walls this is the first time we have walked through the Ploce Gate since our arrival. The arch of the Ploce Gate opens onto a broad stone bridge Vrata od Ploca that leads to yet another arched gate beside the large Revilin Fort and then up to the bitumen road beyond. 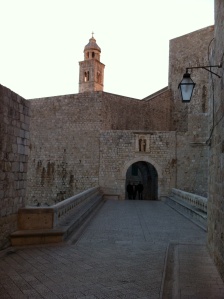 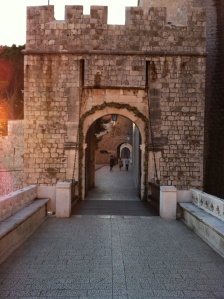 We follow the road that runs gently uphill away from the Old City with the nearby Banje Beach below us to our right. Banje Beach is typical of Croatian beaches we have seen thus far, a short stretch of small rounded stones lapped by low crystal clear waves. 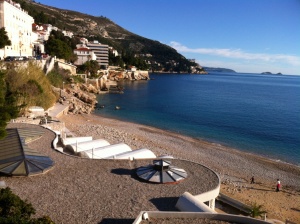 There are a few tourists walking about on the stones below however none seem to have the courage/stupidity to brave the cool water.

From here we can see a tiny beach in the distance where Mt Srd slopes down to meet the Adriatic. I am sure this is our intended destination.

Now that I have got my bearings the going is easy, the sloping street has narrow lanes for vehicles and only has a footpath on the right side in the direction we are heading. The walking section is separated from the road itself by a series of moulded metal poles projecting vertically from the road surface. Making way for people coming the other direction or overtaking some of the slower walkers such as the many older nuns heading in our direction involves playing chicken with the road’s vehicular traffic.

Soon we veer to the right from this busy road and follow a much quieter narrow bitumen road that is walled on each side. To our left houses and units climb the lower section of the slopes above. 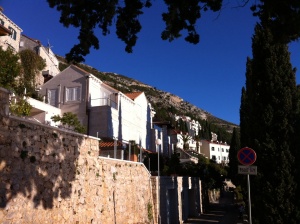 To our right large expensive homes and five star hotels with ornate stepped gardens drape the cliffs above the sea. 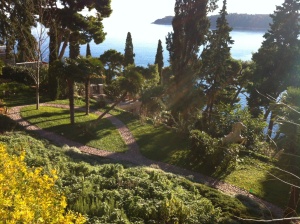 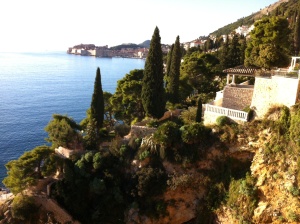 Occasionally we get a glimpse of the beautiful coastline stretching out ahead of us along with views back to the Old City we have left behind. 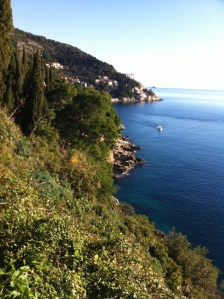 The walled road snakes along the top of the cliffs to our right and appears to end at a car park in front of the small church of St Jakov. If we had not read in the guide book to look beyond this little church we would have stopped and returned without finding our intended destination.

Knowledge is power, the road continues, we circumnavigate the church and find a set of concrete stairs leading down the cliff face not far beyond.

Steep flights zigzag down towards the sea, Pam sends me ahead to scout if these are merely futility stairs that we will just have to climb again before she begins her descent.

We step off the stairs onto the coloured sand below. I am not sure what gives the sand its orange hue however the sight of rocks embedded in this ochre sand reminds me of photographs sent from the Mars explorers. 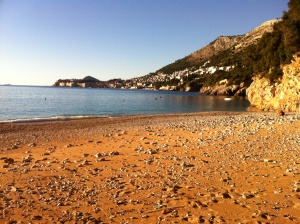 Closer to the waters edge the sand gives way to the small rounded stones we have come to expect on Croatian beaches. Lapping waves move these small stones against each other giving off a unique elongated rattle that traverses the beach length with each waves contact.

We are not alone, another couple with two dogs have also made their way down ahead of us. Pam calls to the dogs however only one responds and comes over for a pat.

Across the smooth blue waters we can clearly see the Dubrovnik Old City Walls and the cliffs of the coastline we have just walked. No wonder Rick Steves likes this beach, the view is truly magnificent. 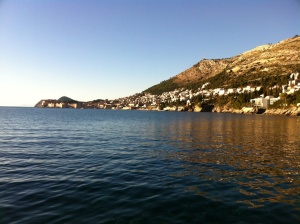 On the Eastern edge of the beach lies a closed cafe/bar, a concrete path leading to a small concrete jetty and around the base of the cliff continues beyond the cafe.

St Jakov’s beach is a little too public for naturist swimming, we decide to walk further along the path from the beach edge. 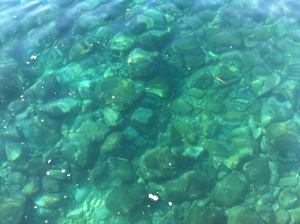 From the concrete jetty the cliffs beyond the beach come into view, we realise the jetty must be part of the ruined building on the cliff above us.

This building has what looks like three tiers on the cliff face that would have been accessed by a now rusting lift from the road above. The windows of the buildings have no glass, stairs leading up from the jetty are blocked by padlocked rusting metal gates. The concrete footpath that clearly once extended unbroken around the waters edge has been ruptured and upturned and is now impassible without some serious climbing. 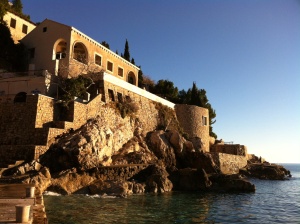 At the waterline by the far end of this ruined structure two fishermen are silhouetted against the blue sky as they cast their rods forwards.

We pause here and rest on the rocks for a while, a more contemplative location would be very hard to find. 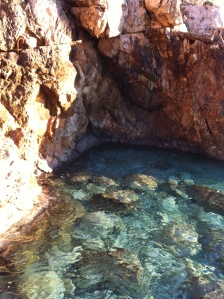 Having decided to return to our apartment we make our way back to the staircase and climb the steep stairs back to the road above. Pam is ahead of me and turns to the left heading back towards Dubrovnik.

Something about the mysterious building we have just seen from the waters edge is calling to me and I yell ahead to my vanishing wife that I am going to have a quick look at the building from the road.

I pass the tower that houses the lift structure and turn right to what I think are the full grounds of the building. There is an amphitheater filling a hollow in the cliff that we could not see from the water, stairs run down each side to the stage area at the base where a flaking mural painted on the flat surface is visible under layers of dust.

The buildings we had observed from the water are to the right of this amphitheater as I face the water below and I walk down the stairs and enter the large building on the second level via an empty doorway.

The frame and roof of this building are still in reasonable repair, at least nothing is falling down on my head as I enter. All the window frames are empty, graffiti covers the walls, stairs heading into the darkness below are covered in loose trash and I do not attempt to descend further.

I make my way across the dusty mural and climb the stairs that lead to the waters edge on the far side of the amphitheater, this must be how the fishermen below accessed the rocks from which they are still casting their lines.

Knowing Pam is waiting for me I head up the stairs rather than climb down to the water. At the top I find that I have only encountered a small fraction of the full extent of the ruined building. Across the road at the top is another much smaller amphitheater that houses a now dry swimming pool and further down the road more wrecked and un-repaired buildings line the left side.

An apparently homeless man is coming out of one of the many doors leading to the street and I decide that my exploration has gone far enough for today.

I curse the fact that I had given the iphone to Pam on the beach and had not recovered it from her before our paths briefly diverged.

Pam is waiting further up the road and I do my best to drag her back to explore the grounds of the wrecked structure that has so vividly grabbed my attention however she is none to keen especially when I start talking about falling wreckage and potential homeless dwellers within.

I compromise at taking a photo of the rusting metal arch leading into the grounds and vowing to return by myself to take the multitude of photos that I desire. 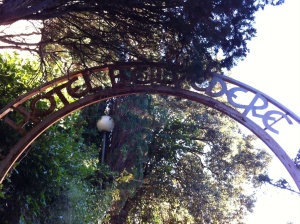 My mind is whirling with questions and dreams of reconstruction as we return to the Old City.

How was this huge Hotel Belvedere so thoroughly destroyed?

Why has no one restored or redesigned such a uniquely magnificent, absolute waterfront, potential real estate dream?

What was that mural all about?

How much do I need to spend to make this fantastic place my home?

We are back in our apartment in a seeming flash and I delve into the Googles for some answers.

Turns out the Hotel Belvedere was a five star hotel comprising a total of eighteen floors and 223 accommodation units layered straddling the road with a massive swimming pool and cliff side entertainment amphitheater that was accessible via road and sea with its own jetty and moorings.

During the Homeland War the Hotel Belvedere became a refuge for citizens displaced by conflict. This role continued until it was thoroughly destroyed by hostile forces during the Siege of Dubrovnik in 1991. The Hotel had been built only six years prior to its destruction.

The Hotel Belvedere was so badly damaged that restoration was deemed impossible, it would be a more cost effective option to level the ruined structures and rebuild anew.

For years the hotel has stood abandoned, only occasionally used for the odd impromptu rave and inhabited by the homeless willing to risk further potential building collapse.

More recently the grounds and amphitheater were used as a location to shoot episodes of the hugely popular HBO series Game of Thrones, hence the now peeling mural painted on the amphitheater floor.

The Hotel Belvedere is now owned by a group of business people who are apparently unable to reach an agreement on how to progress further with the location. It was passed in at auction in November 2013 that failed to reach the minimum 66% of the listing price of 24.3 million Euro required for sale under Croatian Law.

With absolutely none of the requisite knowledge required to accurately base any estimates of construction costs I have arbitrarily nominated double the initial site purchase price for the combined cost of this prime location and building reconstruction.

I have a lot of great ideas and am keen to get to work.

2 thoughts on “The Hotel Belvedere”