Thanks to its constantly maintained and incredibly successful system of fortifications, moats and city walls Dubrovnik spent many centuries as an independent maritime republic.

From 1358 when it seceded from Venetian rule until 1808 when the city surrendered to Napoleon’s all conquering army to prevent imminent Russian invasion this republic known in Latin as Respublica Ragusina and in Croatian as Dubrovačka Republika was self governed.

Cardinal points of the city each had defensive strongholds.

To the landlocked North stood the mighty Minceta Tower that we climbed near the end of our walk around the Dubrovnik Stari Grad Walls.

Defense from the South and the waters of the Adriatic was provided by the cannons of the high walls straddling the natural defense of the cliffs facing the sea. Thinking about Pam nudging me towards the edge of those cliff walls still sends a little tingle of adrenaline coursing through me.

Today we plan to walk to the Western stronghold, the Fortress Lovrijenac.

Legend has it that the 37 meter sheer rock that the Fortress Lovrijenac now stands upon was rapidly fortified for the first time in the eleventh century with construction taking less than three months. Reliable historical records have its present triangular form being erected in the fourteenth century with repairs and reconstructions occurring down through the centuries following.

The Dubrovnik Republic was careful to defend against both external invasion and internal mutiny by the local ruling nobility. If captured the Fortress Lovrijenac would provide a commanding vantage point for attacking the Old City.

Walls facing the potential external enemy from the land or sea were built 12 meters thick to repel sustained attack. Walls facing the Old City were built to a maximum thickness of 60cm so should any of the regularly changed Commanders of the Fort suffer from illusions of grandeur or be tempted by bribery during their short monthly reign the fort would offer them little defense and would be swiftly retaken and repaired.

A famous inscription over the fort entrance NON BENE PRO TOTO LIBERTAS VENDITUR AURO translates roughly as ‘Freedom is not sold for all the gold in the world’.

Today the Fortress Lovrijenac’s cannons are all for show. Tourists are the major invaders, the fort serves as a theatre for events in Dubrovnik’s summer festival and the sheer rock face now acts as a venue for a stage of the Red Bull high diving competition.

A few days ago while Pam was perusing the local wares in the pavilion erected in the square near the tourist office I had been taking photos of the beautiful small inlet that lies between the Fortress Lovrijenac and the Old City walls and had noticed a flight of stairs leading down to the inlet and up to the fort behind the building that houses the tourist office and others.

Pam looks at me suspiciously when I state that ‘I don’t need to peruse any maps to get to the fortress’.

Down the stone stairs, turn right at Prijeke, turn left at the street end then right onto the Stradun, past the Onofrio’s Fountain and out the Pile Gate, up the stairs, across the bridge and we are in the little square.

Pam is still not a believer, the stairs we shall be taking are hidden from sight until you approach the railing that prevents the unwary from falling down the cliff face and into the blue waters below.

Unsurprisingly the staircases are still waiting exactly where I saw them. Down, we go down, into the cool embrace of the stone sides of the inlet.

Small waves splashing across the walkway on the high tide grab at our boots as we make our way along the concrete path heading towards the stairs climbing up the sides of the rocky base that supports the Fortress Lovrijenac.

Tiny details on the sea floor are visible to a surprising depth in the clear waters.

We observe hard to access stairs leading to doors sealing chambers that apparently tunnel into the sides of the rock above however an attempt to clamber to them would almost certainly end in a mirthful soaking.

Something for the summer time tourist to attempt perhaps.

I am looking for angles to try and fit as much of the surroundings into the iphone’s view as possible which distracts me from observing where I am standing.

My inattention is rewarded by salt water splashing into my boots. I can look forward to my new signature scent ‘Salt Socks’ in the days to come.

Leaving wet footprints on the stone stairs we make our way up to a narrow street on the other side of the inlet which we follow upwards with a more modern section of Dubrovnik that includes the restored Grand Hotel Imperial and Mt Srd to our right. 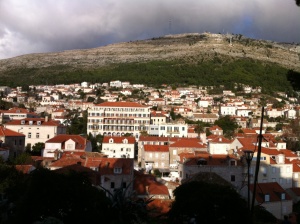 Soon we are at a small park that lies at the base of the steep staircase taking us to the Fortress Lovrijenac entry door.

I walk to the far side of this little park to take shots of the blue waters of the small inlet lying on the Western side of the Fortress Lovrijenac and the parklands above the cliffs on the other side.

The top of the stairs leading to the fort entry offer a beautiful view of sections of the Old City wall. 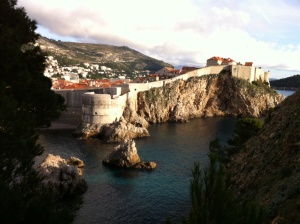 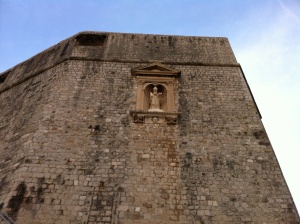 ‘We did walk the walls a couple of days ago however we didn’t bring our old tickets with us’ says Pam and the kindly attendant waves us through.

The lowest section of the fort is dark and cool, a courtyard hemmed by the stone walls with flights of stairs leading to the levels above. 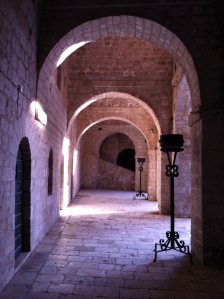 The only way is up.

From the top the view is sublime, the Old City and its walls encircling the red tiled houses are all clearly in view. 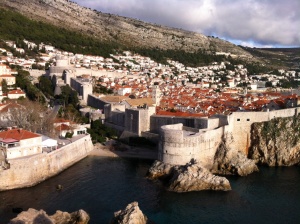 Now I can see and clearly understand the tactical significance of the Fortress Lovrijenac the pyramids of mock cannonballs take on greater significance.

We wander the tops of the fortress walls. Other than one other English couple we have the entire place to ourselves.

Only Pam has the daring needed to lean over the walls to take shots of the waters below. 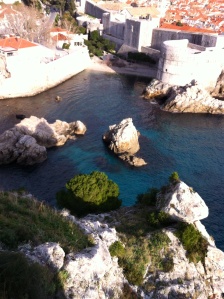 Thanking the attendant for his kindness we make our way back down the staircase to the little park below.

Dark green parklands topping the cliffs of the next inlet beckon irresistibly and after a few wrong turns and false starts we find the road that leads us around the cove and up the slope.

Sunlight casts a golden hue onto the thick outer defensive wall of the Fortress Lovrijenac and the cliff below, beyond this the walls of the Old City are shining above the blue waters of the Adriatic.

Tour vessels, sailing craft and fishermen in tiny rowboats ply the smooth waters between the Old City and Lokrum Island.

The day is idyllic.

Entry to the park passes a small round fountain, we choose paths leading to the crest of the hill rather than strolling the level white fine gravel paths that angle out from this central point.

Through the trees from the crest a small church standing in the curve of a rocky cove is visible and I have an answer to any inevitable further ‘what next’ questions. 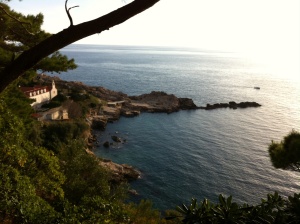 We sit in the shade on a comfortable wooden bench and reflect on our great fortune.

Pam shoots me a look I know all too well.

‘Down to the church and then the rocks below’ I say anticipating the question forming on her lips.

Taking new stone stair filled paths we rejoin the smooth white gravel below and head back towards the circular fountain. Three young children are running round its edge playing with their puppy. 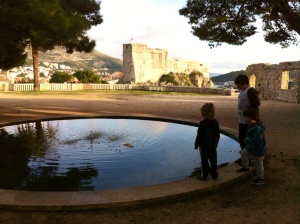 I try to catch a reflection of the sky as the children throw pebbles into the algae filled waters.

Rejoining the road that runs around the cliff edge we turn left and make our way down towards the rocks protruding into the sea below.

The church is small and has a nearby tiny walled graveyard where nuns are gathered in mourning.

Respectful of their sorrow I keep the iphone in my pocket.

Soon after the church the bitumen ends and a narrow concrete path takes us further down towards the waters edge.

This area appears to be popular with locals, fishermen are facing the sea from the rocks furthest away, there is a group of older men in speedos drying off from a refreshing swim, a young couple with a dog that looks like a fearsome black wolf are involved in some indefinable activity on a flat concrete area.

Other people are sitting on the rocks at the waters edge and looking out across the bay.

Blacky the wolf comes over to investigate us. I am doing my best to take photos as we descend and Pam has commandeered my Pacerpoles and is walking ahead of me.

Blacky seems threatened by the strange gibberish speaking lady with the weird poles and adopts a stance that to me indicates he is going to stand his ground. 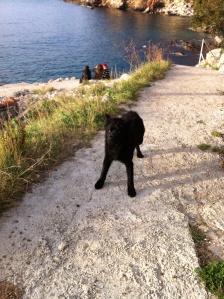 Pam continues to approach him and just as I think he is about to go her for real the young couple whistle him away.

Pam seems not to have noticed, she is pure of heart, she loves dogs and thinks her love will always be returned threefold.

Sometimes even puppy love is unrequited.