Sufferers from red/green colour blindness might have trouble discerning the contrast between the jaunty orange of the Dubrovnik Cable Car and the dark green stripe of forest swathing the lower slopes of Mt Srd.

Pam has good colour vision and we have been watching its rapid climb and descent occurring on a regular half hour schedule for days during our little journeys in and around Dubvrovnik.

Very early on during our stay, riding this lofty swaying contraption leapt to the top of Pam’s ‘must do in Dubrovnik’ list.

My mumbling protests reiterating my feelings about heights and my distaste for carnival rides are met with the usual prescription of a cup of cement.

‘Just harden up’ she tells me.

‘Next thing I want to do is go sailing on a rough and windy day, we’ll see how you like that’ I valiantly mutter to myself.

Having resigned to my not so desperate fate I work out the shortest way from our apartment to the cable car station.

For the first time we commence our journey by walking up the remaining flights of stairs between our apartment and the highest wall of the Old City.

At the top we turn right and descend a series of stairs that take us to the Buza Gate where we turn left and cross the bridge over the dry moat (that now serves as a parking lot) to the street.

Immediately across the street is an underpass and a vendor selling cable car tickets, from here we climb a curving set of stairs that lead up to near the Dubrovnik Fire Station. The Cable Car terminal is close by, up and to the right.

One of the Orange Compartments of Doom is ready and waiting.

I collapse my Pacerpoles and stow them in the sides of my day pack as we wait in the growing queue. Suddenly a technician gets into the waiting car and the cables start to move. I see him dismount and set to work on top of the supporting pole three quarters of the way up the steep sloping wire we are to ride.

‘There is no bloody way I am getting on this thing if they are servicing it’ I exclaim to absolutely no avail.

‘They wouldn’t let anyone on if it wasn’t safe you great big ‘fraidy cat’ is the taunt I receive in reply.

The cables jerk back into action, the other car is coming down to meet us.

Soon after its arrival the doors are opened and the waiting horde swarms in. We have arrived early in the queue and get what Pam cruelly describes as ‘a great position to watch as we climb’.

The car sets off upwards with little vibration, traveling very slowly until it has fully left the terminal mooring device. From here it smoothly accelerates, there is no swaying or jerking and my fears are swiftly allayed.

I take photo after photo of the dwindling Old City below until the condensation rapidly fogging the interior of the glass makes it hard to see out.

Within minutes we are at the top however by the time the car has settled into the cradle at the upper terminal the air inside the car is warm and moist from the exhalations of its passengers.

This orange fishbowl must get damn hot in summer.

Dubrovnik has had a cable car service operating on this route since 1969 however the older fixtures and blue cars that looked like something from the James Bond film Moonraker were destroyed in 1991 during the homeland war.

The new more modern facility with the bright orange cars was reconstructed after the war and has been operating since the summer of 2010.

Exiting the car takes us past a series of photos showing the destruction the previous older facility and blue cable cars suffered during the Homeland War as well as documenting the following reconstruction process.

Great views of the city below through thick glass walls are available in the cafe however our first viewpoint after alighting is from the open air observation deck to the left of the cafe and the cables overhead.

I start snapping away with the iphone however we are not satisfied with the results as the thick cables give the appearance of slicing the Old City in two.

Most of the people who had accompanied us on the ride up are content to stay here and in the cafe however Pam and I are ‘going wild’.

Stairs from the Mt Srd cable car terminal lead us out facing the stark ethereal wintertime grandeur of the harsh high rocky terrain and the barren hills lying beyond.

It is like another world entirely compared to the much warmer lush green environs of the city so close below. 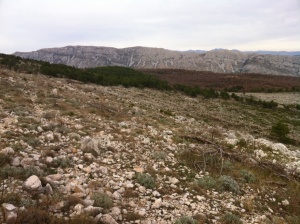 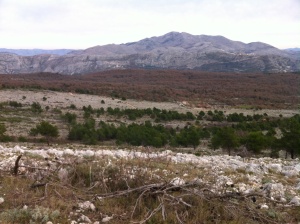 Immediately to our left as we face this forbidding landscape is the Fortress Imperial constructed by Napoleon’s army in 1808 after the surrender of Dubrovnik and the tall blue rocket shaped communications tower.

We initially turn right instead and make our way to the flat area that contains the white stone cross that is clearly visible throughout night and day from the Old City below. The original cross that stood here since 1935 was destroyed during the war and this new white cross is a gift from Brač-Hvar Archdiocese and has been sculpted from Brač stone.

During the war a wooden cross was erected on the site by the defenders of Dubrovnik fighting from the Fort Imperial to boost the morale of the city dwellers below.

Still unable to get a photo of the Old City that does not contain the cables we make our way down the stairs from the cross to the bitumen road that winds down to the villages below. These steps have very tall risers and I realise that my dodgy knees are still a very real issue for me as we descend. 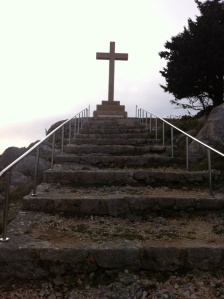 After a short descent down the road we head back towards the cliffs over the exposed white rocks. Magnificent views down the coastline towards the snow capped peaks in the East distract my eyes from my foot placement. 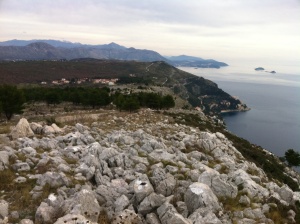 The remains of the Hotel Belvedere are exposed in near entirety where the range slopes down to the waterline.

Making our way carefully to the cliff edge I finally find a spot to capture the complete vista of Dubrovnik Stari Grad and Lokrum Island with no incursion from the cables that will be carrying us back down the hillside.

We spend a long time here sitting on the white boulders, talking about our travels past and those to yet to come.

The air is cool however there is little wind and we sit enclosed in our little shimmering bubble of dreams with the glory of the Croatian coastline at our feet.

For many reasons is Dubrovnik known as the ‘Pearl of the Adriatic’.

Eventually we realise that we have only covered one side of the Mt Srd cable car terminal and make our way back to the road that takes us back to the Fortress Imperial.

This squat stone building was clearly built with military purpose in mind rather than any aesthetic function.

Currently the fort operates as a museum displaying relics of the recent Homeland War and we decide to save a visit for later as by now we are determined to return another day to the top of Mt Srd under our own steam.

Today we merely walk around the bluff stone exterior and make our way up and along the stony ridge that lies to the West of the fort.

Evidence of the recent war still exists on the ground here, stone walled defensive trenches dug into the rocky ground of the hill crest remain as grim reminders of the deadly struggles fought over this territory. Rusty metal scraps and barbed wire have been tipped into the trenches making them impassible to inquisitive tourists. 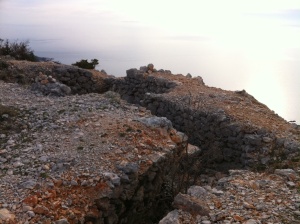 A simple wooden cross erected near the sea edge of the largest of the remaining trenches is held in place by a white rock cairn.

Spectacular views of some of the multitudes of Croatian islands stretch out to the West.

Taking a big gulp of the cement Pam prescribed earlier in the day I get some great shots of the Old City, the Fortress Lovrijenac and parklands where we had wandered the day before.

We have spent several hours on top of Mr Srd by now, Pam is demanding coffee so we return to the cafe where we are unsurprised to see the prices are quite expensive.

Still, not as bad as the Gaffe.

Gliding down back to the Old City is quick and painless. We make our way back down into the town via the staircases taking us directly from the Buza Gate and turn right onto the Stradun.

We have been eating simply in our apartment for days in an effort to restrict the outflow of funds however today we decide to have Linner out.

I have noticed a little hole in the wall on one of the side streets that sells pizzas and burgers that include a vege burger option while we have been walking around town on our adventures.

We make our way there and each end up having large delicious burgers on broad fresh toasted buns with some hot crunchy chips accompanied by a 500 ml beer and a little bottle of white wine for 80 Kuna.

As we sit outside in the narrow street tables to eat our meal I notice some shiny lions head brass doorknobs on the dwelling opposite us.

Out of what is now feeling like habit, I take my last photo of hundreds for the day.